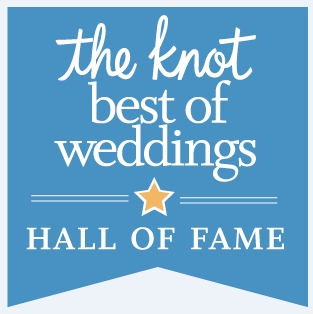 THE KNOT REVEALS HALL OF FAME: THE BEST OF THE BEST IN WEDDING INDUSTRY

NEW YORK (October 1, 2013) – Whether they’re trying to find the wedding dress salon with the best service in Philadelphia, the most creative wedding photographers in Los Angeles, New York’s top cake bakers or Miami’s hottest reception sites, engaged couples across the country want the inside scoop from real brides. The Knot Wedding Network (NYSE: XOXO), which is composed of the top two wedding websites, TheKnot.com and WeddingChannel.com, today announces the first-of-its-kind wedding industry Hall of Fame for the all-time best wedding vendors across the United States.

Included in this list is Casa Ybel Resort, one of a select few in Florida and only one for Sanibel Island.  Casa Ybel Resort specializes in Destination Beach Weddings and Receptions.

Casa Ybel Resort  is thrilled to have been named as a Hall of Fame honoree. “We would like to thank our past clients for taking the time to review our business on The Knot Wedding Network; it means so much to us and our business to have received such tremendous feedback over four years. We are dedicated to providing excellent service to all of our clients and look forward to helping future brides plan their perfect day.”

“For the past seven years, our reviews have been the definitive resource for our brides, providing them with unparalleled vendor recommendations directly from the tried-and-true experiences of fellow brides,” said Carley Roney, cofounder of TheKnot.com. “We’re beyond thrilled to induct our first-ever Hall of Fame, crowning the best of the best across the country, based on more than 725,000 reviews from real brides.”

About XO Group Inc.
XO Group Inc. (NYSE: XOXO), is a global media and technology leader devoted to weddings, pregnancy and everything in between, providing young women with the trusted information, products and advice they need to guide them through the most transformative events of their lives. Our family of premium brands began with the #1 wedding brand, The Knot, and has grown to include WeddingChannel.com, The Nest, The Bump, TheBlush.com and Ijie.com. XO Group is recognized by the industry for being innovative in all media – from the web to social media and mobile, magazines and books, and video – and our groundbreaking social platforms have ignited passionate communities across the world. XO Group has leveraged its customer loyalty into successful businesses in online sponsorship and advertising, registry services, ecommerce and publishing. The company is publicly listed on the New York Stock Exchange (XOXO) and is headquartered in New York City. Follow XO Group on Twitter @xogroupinc.

We believe that where ever you are, whether or not you are ready, true love will find you.  So it was with Jonathan and Karen.  One evening, before they knew each other they both happened to be attending an event at their church.  As soon as Jonathan saw Karen he knew he wanted to get to know her.  He told a friend he would like to date ‘that girl’, but his friend said he thought she was already dating someone and so the matter was dropped.

A few months later Karen’s relationship ended.  Jonathan had not forgotten her and saw his chance. He asked her out on a date, but Karen wasn’t ready.  Jonathan knew Karen was special and would check in from time to time.  Eventually Jonathan decided to take a step back to give Karen some space.   Believe it or not, Karen missed Jonathan and realized there was more to him than she originally thought.  Karen told her friends to tell Jonathan’s friends if he asked her out again she would agree.  This was just what Jonathan was waiting for, they arranged a date and well… they’ve been together ever since.

They both love the beach and decided Casa Ybel Resort was the perfect setting for their destination wedding.  Family and friends joined them in the sunshine to pray with them and attest to their covenant of marriage.  Nautilus Photopraphy photographed them during and after the ceremony  as they walked and talked on the beach.

The DJ announced the new couple as they danced to Train’s Marry Me.  Later Karen danced with her dad and her sister said a few words as they cut their beautiful cake.  The food was blessed and everyone enjoyed a sumptuous Brunch Buffet at the resort’s Thistle Lodge Beachfront Restaurant.  This wonderful couple enjoyed their special day with  family and friends outdoors on the  Flagstone Veranda to the tune of steel drums in the background.  We are all honored to be a part of this celebration. 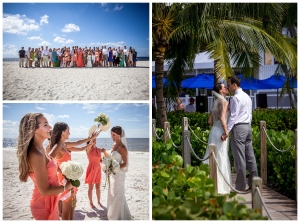 Reception on the Flagstone Veranda of the Thistle Lodge Restaurant

Casa Ybel Resort is pleased to announce they have been selected winner in The Knot Best of Weddings 2012 for Knot Florida Magazine and theknot.com.  This is the second year Casa Ybel Resort has been voted one of the top Wedding Venues for the west coast of Florida.

We would like to thank our wonderful brides and grooms for nominating us for this distinction and we would also like to send a special thank you to our colleagues and service providers for the accomplishment.  We look forward to another year of making Sanibel wedding dreams come true.

The Team at Casa Ybel Resort 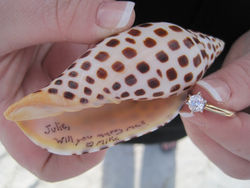 This junonia was "planted" on the beach by Michael Grey to propose to his fiancee Julia Dressler. The couple was married in April at Casa Ybel Resort surrounded by friends and family.

As reported in the Sanibel Captiva Islander Newspaper on May 6, 2011

On Jan. 15, 2010, The Sanibel-Captiva Islander contained a charming article about a young man from Pennsylvania who proposed marriage to his sweetheart by ‘planting’ a junonia on the beach with his “will you marry me?” message printed inside the shell.

On April 9, Julia Dressler and Michael Grey made good on the promises from 15 months ago and tied the knot in style at Sanibel’s iconic Casa Ybel Resort.

The bride was escorted to the 4 o’clock beach ceremony site by her parents, Suzanne and Barry Dressler of Jeffersonville, Pa., and Sanibel. Awaiting them were 75 guests who had assembled from as far away as Washington State and as near as Sanibel. As the bride approached, a spontaneous cheer went up from the guests, surprising all.

Awaiting them was the groom, accompanied by his best man, Josh Weigner of Boston, and Julia’s Matron of Honor and cousin, Erin Intessimoni of Waterford, N.J.

Sanibel resident and owner of Weddings by the Sea, Patricia Slater, conducted the ceremony uniting the couple. The very personal insights of Slater’s service included the couple’s love of the island and of finding that special junonia discovered on the beach at Sanibel Moorings, where the bride’s parents have owned their home-away-from-home since 1985.

The Matron of Honor proclaimed a reading from Sacred Scripture, the First Letter of John, in which God is acknowledged at the source of love. Mrs. Intessimoni also offered a Nuptial Blessing, on behalf of all those present, near the conclusion of the ceremony.

The couple’s vows amused the gathering with their whimsical yet deeply-heart-felt commitment.

The bride, a die-hard fan of the Philadelphia Phillies, promised that the groom would always be her MVP, that she would share their road trip of life together through many championship seasons.

The groom, a collector of antique Jeeps, promised a life of love and excitement that would be as much fun as driving a rugged trail Jeep with no windshield, no doors or top! The couple obviously knows the value of a sense of humor within married life. 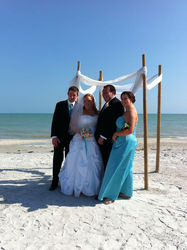 Bride Julia Dressler and groom Mike Grey are flanked by their best man Josh Weigner of Boston and matron of honor Erin Intessimoni of Waterford, N.J

Following the ceremony, guests enjoyed a cocktail party on the Great Lawn with butlers serving the couple’s signature drink, Sanibel Sunset, immediately upon arriving off the hot, sunny beach. Hors d’oeuvres were enjoyed, and tropical music by Clint Wiley delighted the guests until dinner was served under a magnificent tent. Chef John Wolff, of Thistle Lodge, served a delicious plated dinner featuring a duet of Filet Mignon with a red wine demi glaze and Florida Grouper with a key lime-infused butter sauce.

The bride and groom and all the wedding-goers danced the night away to the energetic music of Clint Wiley’s None Other, six-piece rock band of state-wide renown. It was a gorgeous, starry night with Gulf breezes cooling the dancers. The band ended the festivities with Journey’s “Don’t Stop Believing” which brought down the house.

All of the images and memories of the day’s events were captured by highly respected Sanibel photographer, Nick Adams. It was a perfect day comprised of dozens of details all expertly overseen by Casa Ybel’s Wedding Coordinator, Jennifer Dube.
After a “Morning after Mimosa Party” at the Dresslers’ home on Sunday morning and spending a relaxing day with friends and family, the couple departed on Monday for the docks at Fort Lauderdale. Awaiting the newlyweds was an 11-night cruise on Celebrity’s Equinox balcony state room and concierge class service to the countries of Mexico, Honduras, Costa Rica, Panama, Columbia, and Grand Cayman Islands. While there was no television reception of Phillies games, the couple did experience two shore excursions of Jeep-adventuring through the rain forests in Central America!

On April 22, the couple flew north to take up residence in their new home in Skippack, Pennsylvania. But their hearts belong to Sanibel and it won’t be long until they return to the place they love best. 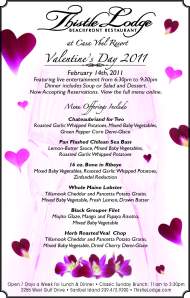 You can view small sample of the special menu by clicking the image to the right.
View the full menu online at ThistleLodge.com